So, as you all know... the semester holiday have already started and I'm officially now back in my bunk. As usual, I always have an endless boredom during the holiday apart from lepaking and sleeping. However, this semester holiday seems a bit different. Luckily my family received a visit from my aunt and her family which provided me with a cousin for approximately a period of one week.

Well, since the holiday have started... I am so determined to make myself as a more capable driver since I haven't drive any car since the day I received my license. It has been around four to five months I think. So to achieve my objective, I dragged my cousin almost every evening to lots of places. I drove the car by myself for the first three days of the holiday.

On the fourth day, I dragged my cousin for a cruise around the housing area. Yeah, I know. Its a bit pathetic but I should take it slow if I don't want to surprise myself.

On the fifth day, me and my cousin went to the Taiping Central mall to watch The Immortals and also for shopping. Oh, we also met Aaron Aziz there. HAHAHA. I forgot to mention, it is a big poster of himself for the movie Ombak Rindu. I can't wait to watch that movie... and twilight too. It is such a waste that I can't watch that movie together with the babes before the holiday started especially when I think about how eager we feel at that moment.

This is me and my cousin, Asmiza Nadiah at the mall.

Then, on the sixth day... we went for a cruise again. But this time around the town. Oh yeah, we do make a short trip to Popular bookstore. I am quite devastated that day since at first I am so eager to find the latest novel "7 Hari Mencintaiku" by Siti Rosmizah and also "Why Men can't Listen, Why Women can't Read Maps." Well, the sales attendant told me that the novel by Siti Rosmizah was sold out and they don't have the other book. One thing that annoys me is that I really can't understand why most of the sale attendants always heard "Men are from Mars, Women are from Venus" by Dr. Gray rather than "Why Men can't Listen, Why Women can't Read Maps." The sounds are totally different ! Oh well... rather than making myself feeling blues... I end up with buying another tho books and a magazine. 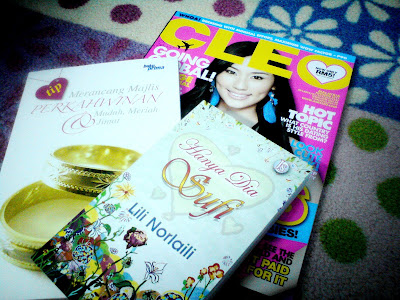 I know the second book will be useful one day while the rest just for pleasure reading.

As for today, we went to The Gate Cafe since my cousin always had this talk about craving for chicken chop. So I guess I bring her there since their western foods are really good. Plus, I am also in the mood for western foods right now. 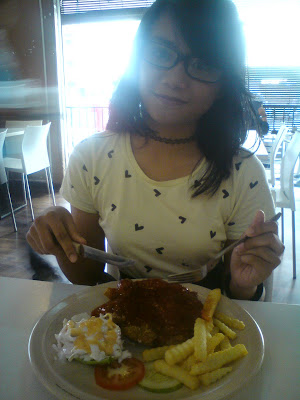 and my cousin ordered Fried Chicken with BBQ Sauce.

After we've done stuffing ourselves with the food, we went for a cruise to Taiping Lake Garden. The people there today were not as many as the people during the weekends. So we take that opportunity to snap few pictures of ourselves before heading back home. :)) 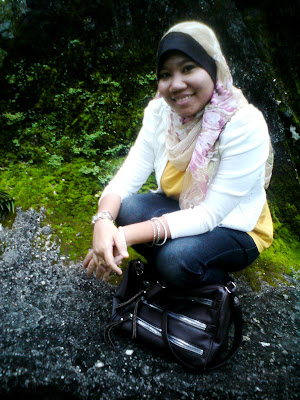 I guess that's all the thing's I've done for the week. As for tomorrow, we've planned for a visit to Maxwell Hill. I think now is the season for the tulips on the hill to bloom. And yeah, me may have a quick stop at the mall to check if we can start buying the ticket for Twilight which will be released on 24th of November.. :))

I'll see you soon !
mumble by Unknown No comments:
Email ThisBlogThis!Share to TwitterShare to FacebookShare to Pinterest

#andatausiapaanda
mumble by Unknown No comments:
Email ThisBlogThis!Share to TwitterShare to FacebookShare to Pinterest

:)
mumble by Unknown No comments:
Email ThisBlogThis!Share to TwitterShare to FacebookShare to Pinterest

I just knew it. :)
mumble by Unknown No comments:
Email ThisBlogThis!Share to TwitterShare to FacebookShare to Pinterest

I need to forget what's gone. and some things just not.

Before you assume that what we hurt you, learn the facts that we are the ones who actually feel the pain. Looking back at all the memories that we've had, most of it were just filled with how you admire others. Can't you notice the people who always stand besides you all this while? Some of the days were always filled with lots of plans... going for girls' day out, shopping, watching movies and what not. But then, when the day actually comes, it was just filled with the 'bad mood' look on your face together with all the rush, talks about 'membazir' and so on and so forth. I wonder why you can go out until late night, or having a day full of excitement with others but not with us. I wonder why the word 'membazir' never comes out from your mouth when you shop with others. I kinda wonder why you need a reason to go out with us but you don't need one with others. I really wonder why. We never forced you into this, you know. We've had enough with the thought that we used you, etc.

Before you judge that we treat you badly, please understand why. Before you said that we are avoiding you, please think. You should realize that you are one who walks in and out of the place without telling us. As if it was only a motel. Now tell us why we should bother to tell you where we were going when you weren't even here. Have you ever count how many times you actually sit and eat with us during the past months? Have you ever count how many times you actually talk to us without interrupting the conversation with messages or phone calls? Where were you when all of us sit together at the table while laughing at all the inside jokes?

I don't think you realize that the worst crime in friendship is abandonment.


Someday, when you think of coming back...
we might give you a second chance.
However, you should remember...
Second chance does not always mean happy ending.
Sometimes, it is just a chance for you to end things right.